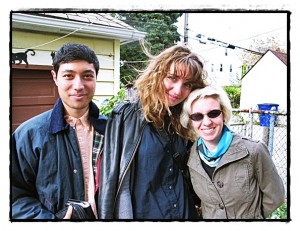 It’s always sweet to find close family from distant places. This has happened to me a few times with relatives discovered on both my dad and mom’s side.

In 2004, I went to Berlin to do a story on the ex-pat Detroit techno scene there. I spent eight insane days and nights — all blurred together, for better and worse, into one seemingly endless party — chasing down Richie Hawtin, Magda (a Hamtramck girl whose family then lived on Belmont) plus other electronic musicians and DJs for a Metro Times story called Losing Your Mind in Berlin.

From there I took a train to Warsaw, where I met Emil Wasacz, his wife Urszula and son Mateusz.
He was a cousin I’d never met, nor knew I had, until we started reading about him in the Polish press. He was a finance minister for the Polish republic, then headed by President Aleksander Kwasniewski, in the late 1990s. My mother wrote to the Polish embassy and we made the connection that Emil Wasacz and my father, the late Walter Wasacz, came from the same region in southeastern Poland.

I was treated to the best that Warsaw, Krakow, Gdansk, Katowice and other smaller towns had to offer over a two-week period. We drove up to the Baltic Sea and down to the Carpathian Mountains near the Slovak border. All of it gorgeous. I could not have been treated better. We have kept our contacts going and invitations to revisit come each year.

Fast forward to this summer, when we received word that connections to more Polish relations were in the works, this time on my mother’s side of the family.

I found out that a cousin, originally from the northwestern city of Sczcecin near the German border, was coming to Windsor as an exchange student. Aleksandra was studying visual arts in Coventry, England with a year left to go before finishing her degree.

When she got to Canada, I got her cell phone number and tracked her down — in old Montreal, of all places. She hit the continent running and was traveling as much as possible with her companion from London, Alex. This week they are in Chicago. Before she goes back to England in December, she plans to visit friends in Vancouver.

Last week Aleksandra and Alex came across the border by bus from Windsor. I picked them up at the Rosa Parks Transit Center and brought them to the Hamtramck Harvest Festival.

On the way we drove through Detroit, touring Corktown, North Corktown and Woodbridge neighborhoods.

They’d already been to some of these areas before in previous weeks — they’d rented bikes at Wheelhouse Detroit on the riverfront to see parts of downtown — but they seemed thrilled by up close and personal views of the intensely visual Michigan Central Station, leafy Commonwealth St. near Wayne State University and Faith Farm and the Spaulding Courts rehab near Temple and Rosa Parks Blvd.
We also took a spin past the “$100 house” — which they already knew about — in the Power House neighborhood north of Hamtramck.

They both talked about “space,” and how much there was of it here. They were fascinated by the vastness of the “place” and how it contrasted with their experience in England. There is post-industrial — Coventry is known as the Motor City of the UK — and there is post-industrial “plus.” That’s where we’re at in Detroit. There is an incredible wealth of quirky urban possibilities here, more affordable and authentically cool than just about anywhere on the planet.

And these two arts-educated young people — Alexsandra is 21, Alex is 22 — seemed to grasp that immediately. They loved Hamtramck, but had to catch a film at the Burton Theatre and then walk back — yes, walk — about 15 blocks south on Cass to catch the bus back over the border.

But they’ll be back. There’s lots more my girlfriend Jennifer and I want to show them, including Disneyland, Public Pool, 2739 Edwin, Popps Packing and the Heidelberg Project. No shortage of eye candy in our part of the world. Welcome to our place, you guys.

The photo is in my yard (left to right): Alex, Aleksandra and Jennifer.