Hamtown Farms site is now up for sale 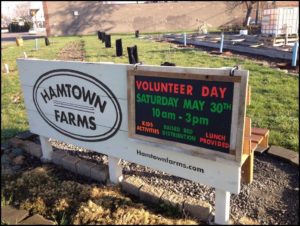 Need land to build on? The Hamtramck Farms site is now up for sale.

By Alan Madlane
The saga of Hamtown Farms is drawing to a close.
On the first of this month, co-founder Michael Davis sent out a press release, detailing the final steps to be taken in the permanent dismantling of the plucky non-profit.
This follows on the heels of their board decision, back in May, to end the community garden due to persistent vandalism issues.
Side note: Hamtramck: You need to do better. Don’t you want to have nice things?
In any case, there are legalities involved in the dissolution of a non-profit.
Their dissolution plan had to first pass the muster at the State Attorney General’s Office. The primary thing to take into account is the disposition of the land, which is most of the value in this case since we are talking several lots, with no building involved.
The letter notes that “many of the tools and other pieces of equipment have been donated to other non-profits in the area.”
However, no other non-profit “with a similar mission and/or other goals” came forward with interest in the land.
So, the lots, located at 9026 Lumpkin St., are now officially up for sale.
There is also, in this case, the complication that Hamtown Farms wanted to make good on the returning of funds, donated by an unnamed group, which had originally been earmarked for a sidewalk upgrade project that never got a chance to get off the ground this past spring.
The group’s missive concludes with the following:
“Rest assured that once the creditor is made whole the remaining funds (from the realization of the sale) will be donated to area non-profits” that do meet the mission/goal similarity test.
Anyone interested in the property can contact the property’s realtor Alex D’Avanzo at alexdavanzo@gmail.com.
July 19, 2019