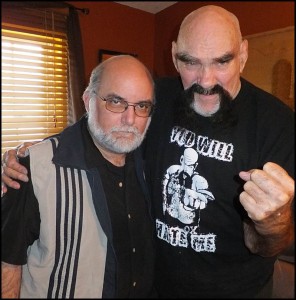 Journalist and filmmaker Mark Nowotarski (left) poses with professional wrestler Ox Baker. Nowotarski has a new documentary on wrestling, called “Battles, Bouts & Brawls,” which is showing next Thursday (May 29) at the Maple Theater.

By Alan Madeleine
Special to The Review

Mark Nowotarski is a documentary filmmaker and local promoter of specialized events.  A Hamtramck native and lifelong resident, he was profiled by The Review back in May of 2010, when he was promoting a documentary on fabled pro wrestling legend The Sheik. He has a new documentary called “Battles Bouts & Brawls.” It will be showing next Thursday (May 29), 8 p.m., at the Maple Theater. Nowotarski was a founding member of CNN’s Detroit Bureau, and boasts over 30 years in broadcasting. We caught up with him in the midst of his busy schedule.

The Review: How did you get involved with BB&B, and what is your role with them?

Nowotarski: Battles, Bouts and Brawls is a direct result of the positive reaction I got to my previous documentary, ‘The Sheik: Wrestling’s Greatest Villain.’ People wanted to know more about the Pro-Wrestling scene in Detroit before The Sheik, and also about what is happening today.

The Review: Were you involved in the making of the film in any way, or are you simply promoting or helping to promote it?

Nowotarski: I am the Producer and Director. Officially, I am listed as the Writer as well, and I’d like to say I’m the writer, but the personalities that are in the program are really the ones who have written it. The film is a piece of history, not only of pro-wrestling, but of Detroit itself.

The Review:  I’m familiar with the Maple Theater inside — will all the guest wrestlers be in the lobby, or inside the theater, or both? Will there be a ring, with any actual wrestling going on, or are these strictly promotional appearances?

Nowotarski: There will be no ring. The guest wrestlers are just that, my guests. They will be there viewing the film, and there will be a short question and answer session also, but this is pro wrestling — who knows what will happen?

The Review: Are there any further plans to screen the film beyond this date, either around the Detroit area or for that matter elsewhere?

The Review: I remember the Detroit pro wrestling scene from the 1960s and went to a match at Cobo Hall as a kid (Lord Layton and Dick the Bruiser, etc.) — who are your stable of wrestlers, and where and when do they perform?

Nowotarski: I am what can be called “Old School,” having seen bouts at Cobo Arena and Olympia, among other locations in the Detroit area. This was in the time frame of the 1960s and 1970s. However, I also try to see what is happening in the world of wrestling today, too.

The Review: Along that line, you had mentioned that Truth Martini and Mark Gjoka actually grew up in Hamtramck. Can you tell us more about those two; how they got into the business, maybe what they’d done before, and whether Hamtramckans would know them from anything else?

Nowotarski: Both gentlemen attended school in Hamtramck. Let’s look at each individual:
Truth Martini:  This man has traveled all over the world. He has wrestled in the WWE, and is currently allied with the promotion Ring of Honor (ROH) and Detroit’s own XICW promotion. Truth Martini has a world-wide fan base, and his own pro wrestling school: The House of Truth (HOT Wrestling School), located here in Centerline. He has trained wrestlers who have made names for themselves around the world.

Mark Gjoka: This man is Mark Lulgjuraj. He is a graduate of Hamtramck High School, and his roots are in Hamtramck.  He has wrestled throughout the midwest, and enjoys his own personal, private life.

The Review: I assume Ox Baker is your headliner, tell us a bit about him.

Nowotarski: Ox Baker is one of the legends of pro wrestling. Wrestling since the 1960’s, he has done battle with everyone from The Sheik to Dick the Bruiser to Andre the Giant. In the world of motion pictures, he fought the character of Snake Plissken in the movie, “Escape From New York.”  He is a true character, and is also a master of “The Heart Punch.”

The Review: Take a little time (and space) to add anything else that I haven’t touched on here, if you would like to.
Nowotarski: This program has been decades in the making, and has taken me over three years to complete. Ox Baker has not been in the Detroit area for over 20 years.
Also on hand for this event is former World Champion Rhino, Truth Martini (promotion Ring of Honor), second generation wrestler and promoter, XICW Detroit’s DBA (Malcolm Monroe Jr.), The Mysterious Movado (wrestler and also a musician in the band ‘The Bump-n-Uglies), referee and promoter A. T. Huck, Jimmy Jacobs, JCW’s Rude Boy (Rudy Hill), Hamtramck pro wrestler Mark Gjoka and wrestling historian-photographer-writer Dave Drason.
The story is told by the people who were, and still are a part of pro-wrestling in Detroit. Also, get the views of personalities from around the country, telling of the impact Detroit-based wrestling has had around the world. Among the people heard from are from Hollywood director-producer Fred Olen Ray and associate producer of the Mickey Rourke movie “The Wrestler,” Evan Ginzburg.
These men give their thoughts on the effect pro wrestling from Detroit has had all over the country and the world. Also included in the program are, among others: The Sheik’s actual nephew, wrestler Sabu; Rob Van Dam; Kevin Nash; ‘Irish’ Mickey Doyle; and others in the pro wrestling business.
This will be a once in a lifetime event, with all of these characters assembled under one roof, never to occur again. The program (film) will also be released as a 2-disc DVD set, loaded with extras.
Information and advance ticket sales to the theatre for the Premiere Event can be found at: WWW.INSENT.NET

One Response to Hamtown movers and shakers … ‘Battles, Bouts & Brawls’