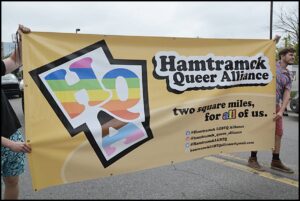 By Alan Madlane
Josh Hansknecht is a local activist who took it upon himself, when he saw a need for such, to create a Facebook page that aims to bring together the city’s LGBTQ persons in solidarity and, hopefully, in being better understood.
The Review asked Hansknecht to talk about what he hopes to accomplish.

The Review: So, can we get a little personal background to start – for example, what is your connection to Hamtramck (born here, or moved here, or just discovered it)?

Josh Hansknecht: My name is Josh Hansknecht, and while a southeast Michigan native, I had never heard of Hamtramck until I moved here five years ago, since getting employment in the city.
However, I am still here, because it has fully captured my heart. This city has the most sensational and diverse people, cuisine, and accessibility that I have ever experienced in my well-traveled life. I don’t want to live anywhere else now, which is why I just bought my very first home here, in the city, back in April.

The Review: What motivated you to start the Hamtramck LGBTQ Alliance Facebook group? Did you model it on any other group, or start it from scratch?

Hansknecht: Hamtramck is a home for everyone, and a place where everyone can say their peace. This includes people who lack experience with Queer people and Queer culture and education on Queer history.
Members of our city government have been involved in multiple debates and conflicts surrounding Pride Month and pride flags, and as much as I was reading about people in support of, or against, the “issue,” I did not see the “issue” speaking for themselves. I noticed a resounding lack of a collective Queer voice to reject the idea that our Queer existence is an “issue” at all.
Unfortunately, the community’s framing of LGBTQ identities as an “issue” to debate — instead of as inalienable human rights — has led to a rash of hateful actions beyond just words, as businesses and even personal homes have had their own symbols of Pride torn down or stolen.
I decided that, if I wanted to improve the situation of harassment and hate crimes in the city that I love, I would need help in bringing together allies and LGBTQ voices to speak up for ourselves, and change the face of the “debate” in this city.
I have served in many LGBTQ organizations in the past, so it is a truth to say that the HQA is modeled from those experiences, but we are just getting the ball rolling, and the final shape of our organization really is yet to be chosen by the people who want to make it.
The Review: You just started the group on July 15, and it already has over 140 members. Are you pleased with the response so far, and did you expect that level of interest?

Hansknecht: Since July 15, when I created the Facebook page, we are up to 154 members, most of whom joined within the first 24 hours.
I was beyond excited to see such a quick response to the group’s creation, which leads me to believe others have felt the same way as I have for a while in this city.

The Review: Do you promote the group anywhere? Or is it mainly succeeding on word of mouth?
Hansknecht: This group was posted to other Hamtramck Facebook pages, however, beyond the initial posting back in July, it has grown by word of mouth, and by friends inviting friends.
That being said, Facebook is not even close to representing the city, and so we hope to continue spreading awareness of our existence so those who want to find us can, including at this year’s Labor Day festival — and by this news article.

The Review: Do you have any plans for any group activities, or is it meant to be primarily an online forum and safe space?

Hansknecht: We will be marching in the Hamtramck Labor Day parade (Editor’s note: this interview was done prior to the parade), and our group does meet in person, typically twice a month on Thursday evenings; keep an eye on the Facebook page for full details of the meetings and events!

The Review: Do you have any links to any other Detroit area (or elsewhere) groups, or plans to link with, or to, any from your site?

Hansknecht: We will be marching this Labor Day with GM PLUS, which is a pride group amongst GM workers, and we are excited to keep bridging connections across communities in the Detroit area!

The Review: Feel free to add anything else.

Hansknecht: To my friends: remember that Pride cannot be stolen or taken down: it is us.
Posted September 16, 2022