Is Old Glory a fading memory in Hamtramck? 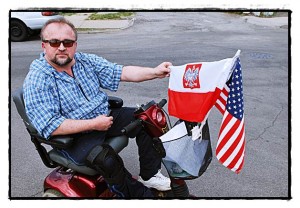 Once upon a time, not too long ago actually, Flag Day in Hamtramck was something special.

But apparently, not anymore.

We’re not sure when this happened, but it seems that within the last few years – three or five? – fewer and fewer households displayed American flags on this special day created by Congress a long, long time ago.

There were even fewer flags out during this past Tuesday’s Flag Day.

It used to be you could look down any block and see house after house with a flag out front or draped down the porch. Oh, there were some houses displaying Old Glory on Tuesday, but it was only here and there. 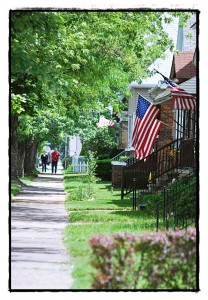 Hamtramck used to be a pretty patriotic town. What happened?

Is it symptomatic of the continuing political fracturing of America? Weariness and apathy from the ongoing sluggish economy?

Or is it a sign of Hamtramck’s shifting immigrant population, a population that is not fully assimilated into the American mainstream?

Even the longtime immigrant community was strangely out of step with the tradition. Over at the Polish American Congress office on Jos. Campau, they had a flag all right on display outside, but it was the flag of Poland.

Well, to be fair, the PAC always displays the Polish flag no matter what day it is.

Also missing this year was the annual flag ceremony held by local vets. On Flag Day vets would hold a special ceremony to dispose of soiled and old American flags in Veterans Memorial Park.

In other words, the flags were set on fire, which is the proper way to dispose of a flag.

Although in the past we’ve commented on the mixed message of the event, it at least was a ceremony of respect for Old Glory.

Now, it seems, the stars and stripes are fading away.

But then late in the day on Tuesday, we looked up from our computer screen and out into Caniff, and there whizzing by the office was Grzegorz “Greg” Marynowski in his electric wheelchair.

There in his handlebar basket was a small American flag, flapping in the breeze.

Back in the 1960s, his family emigrated to the US from Poland. He was 11 years old and coming to America from communist Poland was a breath of fresh air.

Greg, now 55 years old, went on to serve in the Army from 1975 to 1978. Over the past few years, he’s developed degenerative bone disease in his back, hence the wheelchair. He not only had the American flag on display, but also the Polish flag.

He said he flies both flags each day. The Polish flag represents a place that is special to him.
“It’s where my family came from,” he said. “My heritage.”

And for many American-Poles, Poland has an even deeper connection because of Pope John Paul II – the first-ever Polish born person to become Pope.

“I’m so proud of my Pope. He helped end the Soviet Union,” he said.

In other words, the end of communism, which is why the American flag is nearer and dearer.

The American flag, Marynowski said, is all about two things: “Pride and freedom.”