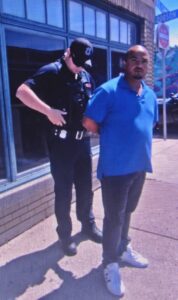 The arrest of a man for disorderly conduct and jaywalking set off swift criticism of how the police department handled the matter. This screenshot comes from a recording posted on Facebook about the arrest.