Keyworth will get a new turf 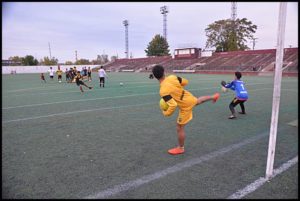 Keyworth Stadium will get a new artificial turf this coming year, thanks to a generous grant.

By Charles Sercombe
Christmas came early this week for the public school district and the city.
On a recent Wednesday afternoon (Dec. 19), it was announced that the Ralph C. Wilson Jr. Foundation awarded the joint school district-city partnership an $800,000 grant to pay for a new turf at Keyworth Stadium and fund a master plan on making improvements in Veterans Memorial Park.
Funding for the master plan study is $175,000.
The Wilson Foundation is awarding communities with grants to foster more physical activity among youths.
A press conference was held at Keyworth Stadium with great fanfare. The high school’s band welcomed attendees and the Michigan Municipal League – the fiduciary of the grant – made the official announcement of the grant.
“We’re talking about building a community,” said Dan Gilmartin, the executive director & CEO of the Michigan Municipal League.
This grant, he said, will once again revitalize Keyworth and Veterans Park – a place with a history that boasts of “authenticity.”
“Hamtramck is pretty cool as it is,” he added.
The current turf at Keyworth is 18 years old and is way past its expiration date.
The stadium has experienced a rebirth in recent years ever since the Detroit City Football Club entered into an agreement with the public school district, which owns the stadium, to lease it for the team’s home field.
The club has already spent hundreds of thousands of dollars to repair the stadium.
The grant will also allow the city and school district to turn Veterans Park, which is city-owned, into a 26-acre campus. High on the list of improvements to the park is to renovate Hamtramck Stadium, which is a state designated historic site.
The stadium was built in 1930 during the time of the Negro National Baseball League. The Detroit Stars played there in an era when African-Americans were not allowed to play in the white-only major league.
Legends – and Hall of Famers — like Satchel Paige and Norman “Turkey” Stearns played there.
The master plan will require input from the community, and is expected to take about several months to put together.
The master plan is to include the following:
• Design and management of a community engagement process to identify resident needs and priorities;
• Development of a physical plan for Veterans park campus, incorporating the existing SmithGroup JJR recommendations for Hamtramck Stadium;
• Suggestions for business models and governance structures for the maintenance and activation of the park, based on best practices from other cities;
• Suggestions for processes to manage the use of the fields and stadiums to ensure accessibility for individuals and community groups;
• Feasibility for the fundraising for the cost of renovating the park.

One Response to Keyworth will get a new turf