Mural brings out the art critics and supporters 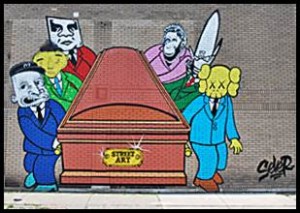 Want to start an argument in Hamtramck?

That’s easy. Bring up the subject of graffiti art.

Specifically one recently painted on the side of a city-owned loft building on Jos. Campau and Goodson.

There, you will see six cartoon figures carrying a casket. On the casket are the words “STREET ART.”

The mural is one of several new ones created by a team of internationally-known artists who were commissioned by the Montana Paint Co. to create public art.

There are some folks in Hamtramck who think the casket in the aforementioned mural is symbolic of the city’s death, and they are mighty perturbed about that.

Mickey Pokoj was so upset he circulated a petition to have the mural painted over and prosecute the artist who created it.

As word of the petition got around, the folks at Maria’s Comida Restaurant on Jos. Campau, just north of Caniff, circulated a counter petition in support of the mural.

The hornet’s nest worth of debate spilled over into the city council chamber on Tuesday night. You could say the anti-muralists were far outnumbered by the pro-muralists, if anyone was counting.

Jason Friedmann, the city’s Director of Community & Economic Development, gave an overview of the murals. He said that since he is the city’s zoning enforcer, it was his decision to allow the murals to get the go-ahead.

Friedmann defended the art, saying that in other areas of the city, as well as in many other cities, it has been proven that graffiti art prevents the spread of illegal graffiti doodling.

Apparently, it’s a respect kind of thing between street taggers and artists.

Pokoj, who lives on Godson St., said no matter what the intent, the casket mural is, in his words, “disgusting.”

“It should be put back to the way it was,” he said. 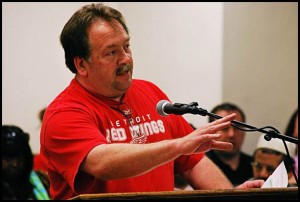 Mickey Pokoj tells city councilmember he thinks one of the city murals should be removed.

Supporters said that while they were sensitive to those who objected, the mural is a priceless addition to the city.

Mark Armand of Norwalk St. said the work will “add to the city’s world-class status.”

Peter Lauwers, who with Tom Thewes, helped bring about the murals, said that “art should not be safe.”
“It’s perfectly fine someone finds it offensive,” he added.

He also suggested that those who are opposed to the mural should first ask themselves: Is it that you don’t like it, or are you truly offended?

And since this is Hamtramck, things took a turn for the, ah, different.

Former city official John Justewicz said another mural down the block from the loft building reminded him of his time spent in Vietnam during the war. He said he would see Vietnamese murals using the same colors.

It was not immediately clear what the significance of that statement meant.

And then in a dig at council, he said the six cartoon characters carrying the casket at first made him think of the six city councilmembers, which elicited a few laughs.

Justewicz also questioned how the city expects to sell the building with a mural on it.

So, what’s next? It’s the consensus in city hall that the issue has likely blown over.

“But it may ruffle a few feathers,” he said.

2 Responses to Mural brings out the art critics and supporters