New acting city manager says there is no conflict of interest 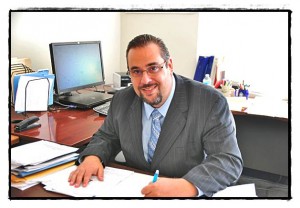 Newly-appointed Acting City Manager Kyle Tertzaj insisted that someone other than the city attorney negotiate employment terms with him.

He told the city council at Tuesday’s meeting that he considers himself a “good friend” of City Attorney James Allen and that it might be “untoward” to have Allen work out his contract.

The council’s resolution to hire Tertzaj included having Allen negotiate the contract.

So, that raises the question, just how good of friends are they?

That is the amount of money that the political action committee that Allen established through his law firm donated to Tertzaj in 2003 and 2004. Tertzaj ran for office in the State House of Representatives but lost.

Councilmember Robert Zwolak said he is concerned that there might be a conflict of interest since Tertzaj is now Allen’s boss.

“I’ll be watching to see if he makes an issue that’s questionable,” Zwolak said. “But I’m willing to give him a chance, see what he does.”

Tertzaj said that since the donation was several years ago “I don’t consider that at all a conflict.”

Tertzaj came to the city a few weeks ago as a temporary assistant to Finance Director Nevrus Nazarko, who for the past month has also been filling the role of acting city manager.

Nazarko, who resigned Tuesday night as acting city manager, said it was City Attorney Allen who recommended Tertzaj for the job.

Tertzaj is a former Allen Park City Councilmember and until a year ago was the city administrator for the downriver community of Woodhaven.

Tertzaj said he resigned from the Woodhaven position, but declined to go into detail about the circumstances of his departure. He had been on the job for nearly two years.

A spokesman for the Woodhaven administration would not discuss details of Tertzaj’s departure.