New Year starts with a familiar look at city council 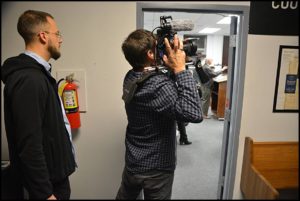 A news crew for a German television station came to this past week’s city council meeting to revisit an old story.

By Charles Sercombe
It may be a new year but there is one story that keeps repeating here in Hamtramck – almost like the movie “Groundhog Day.”
A few years ago, it seemed the world was abuzz that Hamtramck had the first-elected majority Muslim city council in America.
Reporters and documentarians from all over – and especially from Europe – swarmed here to get “the story.”
On the most part, the reports were fair and balanced. Some, on the other hand, didn’t resemble reality. And that reality is, Hamtramck wasn’t transformed, life went on, people for the most part get along and there is still plenty of political bickering just like there has been for decades.
As January kicked off, the first city council meeting of this year was attended by a journalist from a German television company.
We didn’t get a chance to chat much, but the reporter said his television outlet was interested in simply “following up” on the city council ethnic/religious make-up.
If he was looking for sparks, the council did not disappoint. First some background:
During a closed meeting at the last council meeting in December, there was a dustup between Councilmembers Ian Perrotta, Anam Miah and Saad Almasmari … and maybe a couple of others in the room.
There were no fisticuffs but there were implied physical threats and maybe even a little poking.
Long story made short, Perrotta filed a police report after the meeting, and Miah and Almasmari may have also followed suit. But then things quieted down and the complaints appeared to be going nowhere.
The nature of the disagreement has not been made public.
But former Councilmember Cathie Gordon stirred the pot at Tuesday’s council meeting and “for shamed” Perrotta for his behavior.
Perrotta’s brother, Andrew, also jumped into the fray, blaming whatever happened on a mutual “toxic masculinity.”
The brief, but fiery, exchanges will probably make what’s considered good television for the folks in Germany. And the reporter, who we did not get his name, thought it was, well, something.
“Did you see that?” he said to a Review reporter.
The dust has still not settled over the closed-door incident. There is a tentative resolution that might come forth to “censure” Perrotta for whatever happened in the closed-door meeting as well as other actions that occurred in 2017.
Just to keep things in perspective, Hamtramck has a long history of physical combat among city officials. Around here, it’s known as a city council meeting.
For those of you who have been here a number of years, think of the infamous garbage can incident at a council meeting in the 1990s era.
We can also remember a 1980s incident where a certain councilmember “invited” another councilmember to a challenge of fisticuffs.
Trust us, this is just touching the surface of Hamtramck’s bare-knuckled politics.
As the saying goes: “What’s old is new again.”
And as they say in television land, stay tuned.