Once again we pick the ‘Newsmaker of the Year’ 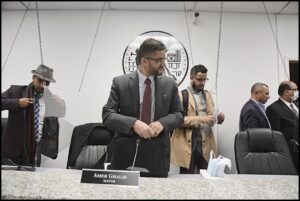 This year is one for the history books with the election of the city’s first Yemeni-American, Amer Ghalib, and an all-Muslim city council.

By Charles Sercombe
With the year 2021 now behind us, it’s time once again to zero in on what was the biggest story of the year in Hamtramck.
It’s something we do every year, and we dub it “Newsmaker of the Year.”
What a year it was. There are simply too many major developments to pick from.
For one, do we even have to say Covid? The pandemic actually gained speed in spreading during the year. There are now over 3,700 residents who have come down with the disease during the past two years, and over 60 who have died from it.
Covid, however, was a national and international story as well. We like to be more Hamtramck-centric in naming the Newsmaker.
There was also the massive amount of federal, state and county funding that came this way: for the historic baseball stadium, the public schools, and for infrastructure repairs for the city, including, cross your fingers, funding to replace the city’s lead water lines.
The Census, too was big news. It revealed that Hamtramck enjoyed a 28 percent jump in its population count – the highest percentage increase in the state – over the past 10 years.
The establishment of four marijuana dispensaries certainly caused a stir among some in the community, who feared that they would attract crime and lead to widespread drug usage.
Nothing of the sort happened in the tightly controlled outlets. Instead of being bad news, Hamtramck is in line to benefit from a windfall of tax revenue from the dispensaries.
And that’s just some of the top stories in the past year.
Whew!
But the one story that we think made the biggest impact – and perhaps for years to come – was the election of Hamtramck’s first Yemeni-American as mayor, and the election of an all-Muslim city council.
The election of Amer Ghalib as mayor meant the end of a 100-year-long string of Polish-Americans who held that office. Mayor Karen Majewski was soundly defeated, by almost 3-to-1.
The election of Amer Ghalib and the city council makes them our “Newsmaker of the Year.”
Congratulation Mayor Ghalib and city councilmembers — we wish you all the best of luck.
Majewski’s loss came at a time when the Yemeni population here had already become the dominant political force. It is likely to stay that way for generations.
The past election even drew national and international media attention.
This change in Hamtramck’s politics will also affect a number of developments in the city. For one, the Muslim population here is very conservative when it comes to social issues such as marijuana dispensaries and LGBTQ issues.
The Muslim community was outraged by the opening of marijuana stores here, and were against allowing the gay pride flag being flown on the city’s flagpole in Zussman Park.
Also, expect the topic of taxes to become a hot-button item.
This is going to be an interesting year, to say the least — but then again, we say that every year.
Posted Jan. 14, 2022