Paczki Day celebrates what Hamtramck is all about: Party 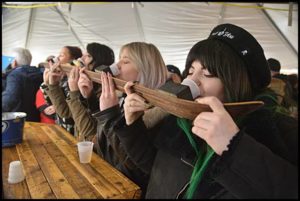 By Charles Sercombe
One thing you can say about Paczki Day revelers is that they are a hardy bunch.
And considering how most of them have been cooped up all winter, and there’s been a hint of spring in the air earlier this week, who can blame them for wanting to blow off a day at work on a Tuesday, and hit the bars?
We met a guy at PLAV Post 10 hall before the paczki eating contest, who shared his itinerary for the rest of the day:
From Post 10, go to the Polish Sea League.
Next, go to New Dodge Bar.
After that, check out Whiskey in the Jar.
Go back to Post 10.
Then, finally, head for one more at Polish Sea League. 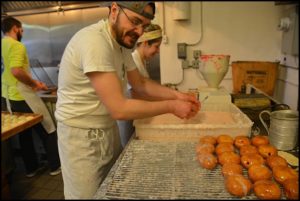 And then, finally – finally, he and his family, with their designated driver, head home to Monroe.
Asked why give up at that point, our man patted his sizeable girth and said: “I’ve run out of room.”
While at Post 10, we stuck around for a little while for that paczki eating contest – otherwise known as “The longest 15 minutes in history.”
Anyway, we’re not sure who won this year, but consider that Matthew Holowicki holds the record of eating 23 of them: we doubt anyone can possibly ever come close to that record. 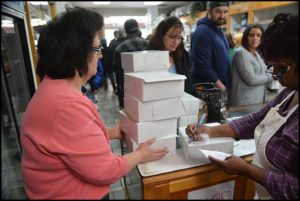 Holowicki “retired’ from the sport in 2017, and last year the “winner” ate 8-1/4, which is about 8 more than we can consume.
Within an hour, we heard variations of the joke about eating these diabetic pastry bombs: “It’s like suicide.”
As usual, New Palace and New Martha Washington bakeries were jam-packed (like paczek!) both on Monday and Tuesday with eager customers.
Despite the gray skies and chilly temps, folks were waiting up to three hours.
Here’s a tip for next year: Phone your order ahead to avoid the long wait.
Here’s another tip: To avoid any wait, head over to Family Donuts on Conant at Caniff – where there is no line, and the paczki is just as good.
We also got a sneak peek at the paczki makers over at New Martha Washington, which had its workers work non-stop all through Monday night.
They were mostly younger folks who were making the best of it with hits from the 1980s keeping them on their toes – and awake.
Billy Idol’s “Dancing with Myself” never sounded so good. What does that have to do with Paczki Day? Nothing, really.
Over at Whiskey in the Jar, we witnessed four young women down a “shotski” for the first time – which requires great balance and timing.
For the uninitiated, it’s a snow ski (“shotski” – get it?) with cup holders glued on for shot glasses that are filled with your poison of choice, which is then lifted in unison up to your mouth(s) and consumed. 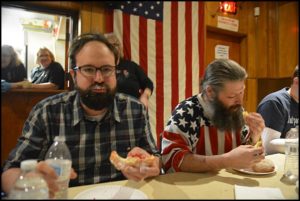 And what is it about Whiskey in the Jar when you approach it from the street? All of a sudden, wafts of Jezy come at you.
That is one hard-drinkin’ bar.
The festivities once again actually kicked off on Saturday with the annual paczki run, which, as usual, attracted thousands of people who also stuck around after, and were treated to paczki and beer.
Not a bad way to prep for P-Day.
After Tuesday, it was time to rest up for this weekend’s music festival. When Hamtramck parties, it goes all the way. 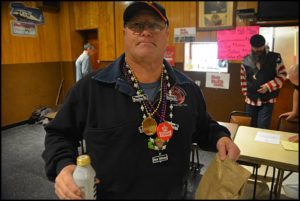