Police now have a choice to make 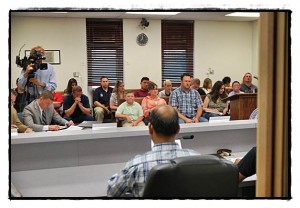 Now it’s up to the two police unions to decide whether to agree to the terms of a new contract.

If they do, city officials are projecting a savings of about $1.2 million.

If the unions reject the offers, the council has already agreed to ask for the state to step in and conduct a financial review – the first step toward getting a state-appointed emergency financial manager to take over.

At press time on Thursday, it was unknown if the two police unions had voted on the contracts.

But there was plenty of grumbling from the union representing patrol officers. Sources said they were upset that they had to take a pay cut, while their bosses in the Ranking Officers Association were offered a raise.

But, considering the possible consequences of a state-takeover, things could get very much worse for officers – namely having the department dissolved and the service contracted out to Detroit or Wayne County.

Officers even face having contract terms dictated to them without union approval under a consent agreement clause in a state takeover.

The city council held several special meetings in order to come to an agreement on new contracts. Until a meeting on Monday, the council had unanimously rejected one contract offer after another.

Monday’s meeting was not unanimous in agreement. In a sometimes tense meeting, packed with police officers and their families and supporters, the council voted 5-2 for the new contract, with Councilmembers Abdul Algazali and Robert Zwolak voting in opposition.

They disagreed with a provision allowing officers to work up to 32 hours per pay period in traffic patrol overtime.

The vote on the contract for the police brass was closer, with a split between councilmembers. Those voting against the ROA contract were Councilmembers Algazali, Zwolak and Cathie Gordon, who were opposed to giving the police bosses raises.

“How responsible is that?” he said.

The new contracts require union members to kick in 15 percent of their pension costs, instead of 5 percent, and eliminates a lieutenant position as well as the position of detective sergeant.

The minimum staffing level would be reduced by one per shift, from seven to six.

In exchange, three positions of corporal will be created, but those command positions require them to be on the road patrolling instead of being inside the police station, which would make up for the cut in minimum staffing.

The salary for the position of corporal would be lower than other ranking officers’ salaries.

There would also be a capping of salaries at a lower end compared to the former contract.

The service of dispatching would also be handed over to a civilian under the new contract.

The council gave the unions until next Tuesday to respond. If the unions reject the offer, the council already voted to have a request for a state financial review move forward on that day.

Councilmember Anam Miah said the contract for patrol officers is a “good place to be” for both sides.

“It might not be the perfect spot,” he said.

But if there is a counter-offer submitted, Councilmember Gordon said it’s likely the council will hold off from requesting a state financial review.