Residents complain that ‘call to prayer’ is too loud 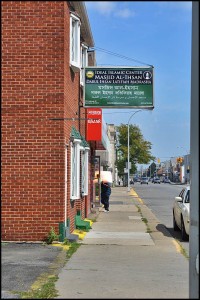 Tenants at the Holbrook Senior Plaza apartments say the Ideal Islamic Center across on the street from the apartment complex broadcasts its call to prayer too loud and too early in the morning.

The debate over the Muslim call to prayer is reverberating once again.

At last week’s city council meeting, several residents of the Hamtramck Senior Plaza apartments on Holbrook complained about the volume level of the call to prayer coming from the Ideal Islamic Center, located across from the apartment complex.

Jeanette Powell said she’s not complaining as a way to “bash anyone’s religion.”

She said the call or prayer was broadcast at 6 a.m. and found the volume “overbearing.”

“Just turn it down a little bit.”

Carol Marsh said not only was the call to prayer too loud, she insisted that the organizers of the center never said it would serve as a mosque.

“We were lied to,” she said. “We were told it would never be turned into a mosque.”

But Sakrul Islam of the center said no one ever said it would not be a mosque, saying an Islamic center “covers everything.”

He warned Marsh that if she continued claiming she was lied to he would file a defamation lawsuit.

He also denied accusations that the call to prayer was broadcast earlier than 6 a.m. Islam said he has since turned down the volume when the police department informed him of the complaints.

Islam accused City Councilmember Robert Zwolak, who lives in the apartment complex, of whipping up complaints.

“He’s against Muslims,” he said.

The center on Holbrook was not the only mosque accused of broadcasting the call too loudly.

Susan Dunn, who is a candidate for city council, said the new mosque on St. Aubin St., the Abu-Bakr Al-Siddique Islamic Center, also broadcasts the call loudly. Dunn lives on Hewitt St., which is a block away from the center.

She said she asked neighbors who attend services at the center to tell organizers there to turn down the volume.

Since then, she said, it’s been “turned down some.”

The complaints launched a long discussion on the city’s noise ordinance and the ordinance regulating the call to prayer.

According to Councilmember Cathie Gordon the city’s ordinance has no teeth.

Police Chief Max Garbarino said the way he’s been dealing with the issue is to talk with mosque leaders and ask them to turn down the volume.

The call to prayer issue first came up in 2004 when city officials were considering an ordinance regulating it. At that time, there was a heated debate over the issue.

Voters approved the ordinance by a 55 to 45 percent margin.

The issue also attracted national and international attention. Periodically, residents complain about the volume of the call to prayer, mostly from the mosque located on Caniff near Jos. Campau.