Toast of the Town … Suzy’s Bar 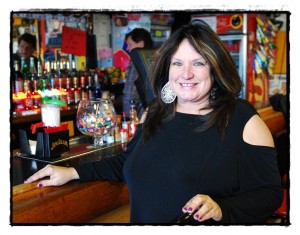 One of Hamtramck’s best neighborhood bars is going to have a special party this Friday (Oct. 22). The owner of cozy little Suzy’s Bar on Evaline is throwing a birthday bash for herself. We couldn’t get her to say how many birthdays she’s celebrated because, well, there are just some things a gal won’t say.

Sue “Suzy” Briskey is a natural when it comes to tending bar. If you come here as a stranger, you will leave as a friend because Suzy is one of the most outgoing and genial folks around here.

She’s pure Hamtramck charm and generosity. Suzy’s is also one of those incredibly tiny bars that can be found here and there around town. Official capacity is at 42 but it doesn’t ever feel cramped. The bar is also home to “Hamtramck Girls Gone Wild.” On special nights, after a few rounds are downed, you can say things get a little frisky here, but all in good fun and nothing terribly naughty.

Suzy’s will also be celebrating another anniversary next April when the bar will be 20 years old, at least in this incarnation. Before it was Suzy’s, the place was called “Rodic’s” and before that in the 1940s it was “Bristol Bar.”

You can imagine what it was like back in the 40s when the town was bustling 24/7 with war production in Dodge Main – the city’s top employer at the time where tens of thousands worked. Few people could drive then because of gasoline rationing, forcing folks to walk or take the trolley.

A little place like this bar was probably packed all day and night.

Suzy herself is a bit of a throwback to a time when people got out and about and knew each other. Suzy oozes love for Hamtramck.

“It’s like Mayberry,” she said in reference to the early 1960s TV show about a little town full of friendly and wacky characters. “You can’t go a block without waving to someone.”

Stop by this Friday and give Suzy — a true ambassador of Hamtramck — a much deserved toast.

We got word late, but a belated congrats goes out to Melody Baetens for her recent marriage. Melody is a Detroit News scribe by day and co-owner and drink slinger by night at Small’s – one of best rock and roll showcases in the area.

We don’t have any details about the nuptials but whoever ringed Melody is a lucky fella. Melody, by the way, is also a mighty fine bassist and plays in too many bands to keep track of.

Word on the street is that the legendary Clock Restaurant is coming back, new and much improved. We don’t know when but according to a reliable source the place received a major do-over inside. You may have also noticed that the restaurant was recently in a scene in “Detroit 1-8-7.” You know who else was featured in the Detroit-based TV cop show? Three Star Bar B Que. In fact, several scenes were filmed throughout the city and we hear there will be more filming coming up.

That’s one of the best parts about the show, identifying where in the Detroit area the scenes were filmed.

And while we’re talking food, we can’t help but put in one more plug for the newly revamped — cuisine-wise — Maria’s Comida. The Pronko family has redone their menu and now offers not only some good Mexican eats but also an Asian fusion as well.

Any DJ’s out there looking for work? If so, Celina’s Sports Bar is looking for someone “who can attract a crowd” to man the turntables on Wednesdays, which will now be called “College Night.”

We haven’t heard too much about Halloween fun happening in the bars, but Whiskey in the Jar is getting into the spirit, or should we say spirits, of the season.

Next Thursday (Oct. 28), the bar will host a Halloween party called “HalloWhiskey 2.” As the name implies, it’s the second year for this special night. What does it entail? Oh, just the same nightly clinking of glasses is our guess, except maybe with some patrons in costumes.