Unfolding the story of Easter … 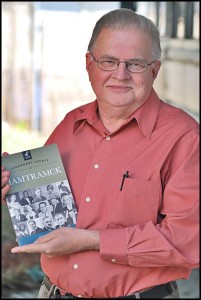 Greg Kowalski is the Chairman of the Hamtramck Historical Commission and has written several books on Hamtramck.

By Greg Kowalski
Much of the history of modern Hamtramck can be found in the pages of The Citizen newspaper. From the 1930s to the 2000s, The Citizen chronicled the daily activities of Hamtramck — important and trivial — with great detail.
What made The Citizen such an insightful observer of Hamtramck was not just its weekly news stories, but its entire package, including comments, ads and photos. The paper relayed more about the community than it intended to.
Just breeze through the pages of an old paper and you can piece together a mosaic of the community in fine detail.
Easter provides a prime example, and the edition of April 14, 1960, is an excellent showcase of how important Easter has been in this town. Churches would be filled and the Catholic — and even public — schools would hold Easter activities. This was more than a religious observance — it was a signal that spring had arrived and this was a time of renewal.
This edition of The Citizen was filled with stories about Easter beginning with the front-page story “Churches to Observe the Story of Easter.”
“Thousands of Catholics and Protestants will flock to local churches for Easter Morning services,” the story stated, and then listed the Mass schedules for a host of area churches including Our Lady Queen of Apostles, St. Florian, St. Ladislaus, St. Augustine, Transfiguration, Our Lady Help of Christians, St. Louis the King, St. Bartholomew and Resurrection.
Many of these parishes no longer exist, but in 1960 they were still going strong.
The front page also featured a lead photo of William (Billy) Kozerski and his sister, Rosann, decked out in their Easter outfits under the heading “In Easter Garb.”
Their dad, William V. Koszerski, was a future Mayor of Hamtramck, though at the time he was a councilman.
The Easter theme continued on the inside pages.  The story titled “Easter Show Held Tuesday at School” probably seemed mundane then but it would be a real eye-opener today.
“There was something new at the annual Easter program held at the Hamtramck High School auditorium on Tuesday for the student body,” the story stated.
“A guest soloist, Joseph Janus, along with the Hamtramck High School chorus, under the direction of Robert Braman, sang four selections from the Seven Last Words,” including ‘Jesus Walks the Lonesome Valley.’”
The concept of a public school holding such a religious presentation today is unimaginable.
In addition to the more familiar churches the paper noted the special services to be held at the Evangelical Assembly of God, 13881 Jos. Campau, just outside Hamtramck. “Besides special music and song, Rev. A.F. DiMusto does oil paintings during the services and awards them to the persons bringing the most visitors…”
Of course, the business of Easter also was prominently featured in the paper. Drucker’s Fashions and Furs, 10238 Jos. Campau, advertised Easter dresses for $9.90 (regular $14.98).
Max’s Jewelry Co. was selling Easter remembrance crosses for $3.98 to $14.88 and crystal rosaries for $3.88.
And, naturally, Kowalski Easter hams were (and still are) an Easter tradition. Ham is one of the foods people would include in the Easter baskets they would take to church to be blessed on Holy Saturday. This is a tradition that continues today.
Pure Food supermarkets were offering Easter meats, including ham for 39 cents a pound and homemade kielbasa for 99 cents a pound.
Even the Hamtramck Fire Fighters Association placed a Prayer for Easter on a page.
Seemingly every politician in town had an Easter greeting ad. Mayor Al Zak wished everyone a “Joyous Season.” City Treasurer Walter Bielski did the same, as did Common Council President Julia Rooks, City Clerk Walter Gajewski, Judge Rudolph Maras and family and Constable Edward Borucki, among others.
Even the bars spread Easter cheer. Bienkowski’s Bar, 10224 Conant, extended “best wishes” to all at Easter.
And, finally, Thomas Adamski, 14, and Celia Wolok, 10, who were students in the Orthopedic Department or Pulaski School, were pictured selling popcorn to raise money for Easter Seals.
These days attendance at churches has faded somewhat. There are various reasons for that, but the spirit of Easter — the holiest of all Christian holidays — remains strong.
And now, just as it was 54 years ago, you will still hear many wishes of “Happy Easter” this Sunday.

One Response to Unfolding the story of Easter …