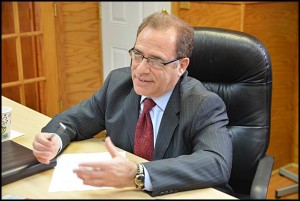 Wayne County Executive Robert Ficano visited The Review office on Monday to talk about his accomplishments and why Hamtramck voters should support his re-election.

By Charles Sercombe
Without a doubt, Wayne County Executive Robert Ficano is in the political battle of his life.
Ficano is facing some big names in the upcoming August Primary.
During the past two years his reputation has been tarnished from having some of his appointees convicted of corruption and — maybe the most damaging — the construction of a new county jail going horribly wrong to the point where it was left unfinished.
Despite the challenges he’s facing, Ficano is fighting back. On Monday, the county executive visited The Review office, alone, and granted an open-ended interview.
We asked right off the bat, what can Robert Ficano do for Hamtramck?
“One of the most important things we can do, obviously besides work on your roads, is economic development,” he said without missing a beat.
He said that during the past few years his administration has worked with Kowalski Sausage Co. with its expansion plans (and it appears to be ready to happen), bringing in a business (he couldn’t name at this time) to build on the Hamtramck side of the former American Axle plant, had a hand in ending Hamtramck’s infamous housing lawsuit and is working to bring in a recycling plant on Conant.
As for getting the county to take care of Conant, which has long been a major complaint of local officials, Ficano was honest to say: “It gets complicated.”
That’s because, Ficano said, the street is also partly on the Detroit side of the Hamtramck border, and that requires Detroit to get involved. The way Ficano wants to get this job done is to totally redo Conant.
A quickie resurfacing could take place much sooner than the two-year estimate he gave to rip up the street and rebuild it. Ficano said there also could be added funding from the state legislature to help with the project.
As for the downtown jail boondoggle, it’s also more complicated than what many have heard about it.
Work on the jail was halted by Ficano after it became apparent cost overruns were going to exceed the $300 million total the county had agreed to.
“You have one of two options: Either you can say stop, and I’ll sue you … or you say OK, I’ll pay the additional money,” Ficano said.
“Traditionally, governments always said OK we’ll pay you the additional money and move on. It took more political courage, I believe, to say stop, we’re not going to do that. We’re going to sue you, which we are.”
He said the county will decide by early June what to do next. It could be the county will go ahead and finish the project, with new contractors, or sell the site. The county could then renovate a former state prison on Mound, just outside of Hamtramck.
No matter what, Ficano said, the original cost of the project will still not be exceeded. One thing that will lessen the financial blow is that the value of the land where the jail is at is worth a lot more now than it did when the project started a few years ago.
As for the future of the county jail in Hamtramck, it’s still undecided what will happen there. Even if the county sends its prisoners to another jail, Ficano said the building will still be used, which means the $500,000 a year Hamtramck receives in lieu of taxes will likely continue.
The subject of revenues to communities and the county has also been on Ficano’s mind. He has called for tweaking Proposal A, which caps how much cities can collect from property taxes as property values rise and fall.
He said the law is outdated. He also lashed out at the state for withholding state revenues, which has put many communities and public school districts in financial jeopardy.
“If they had to stick to the statute amount they were supposed to, Wayne County would have a surplus today of $75 million,” he said.
For the 32 years Ficano has held public office, 20 as Wayne County Sheriff and the last 12 years as County Executive, he has had a special connection to Hamtramck.
The grandparents of his children lived in Hamtramck, near St. Florian. For years he has participated in the Polish Day Parade, and has been a frequent visitor to our popular Polish restaurants (a “weighty” problem of his, he joked).
“You have some great traditions,” he said about what makes Hamtramck so unique and widely loved.
Another feature, of course, is the city’s ethnic diversity. That’s something Ficano said he has replicated in his administration. But showing diversity in his staff is just one aspect, he said.
“What is really important is the inclusion,” Ficano said. “It’s one thing to be diverse, it’s another thing actually to be at the table and have them make the decisions.”
As for all the media heat he has taken in the past two years, Ficano said he remains focused.
“Like in any career, sometimes you have some hiccups. It’s how you come back and what you do to remedy those things,” he said.