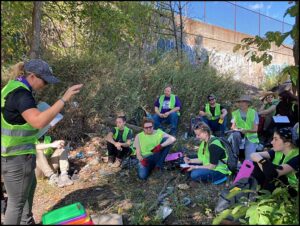 Wayne State University archaeological students are back again to explore a new site in the city in search of clues to the city’s past. Photo by Greg Kowalski

By Greg Kowalski
The Review Special Writer
It doesn’t look like much: Just a sea of tall weeds littered with broken bottles, pieces of smashed china and a wide variety of things that most of us would just call trash.
But to a group of Wayne State University students, these are keys to the past. And they can open doors that have been locked for more than 100 years. The 13 students (and a handful of volunteers) armed with shovels, spades, measuring tape, markers and whatever else they need to carefully dig into and document the past are exploring what may be the richest archeological site in Hamtramck.
“What we’ve learned through preliminary archival research thus far is that this site was the location of commercial and residential buildings from at least 1881 onwards,” said Krysta Ryzewski, WSU chairperson and professor of anthropology at Wayne State, who is directing the students.
“There is a record from 1881 of a barn, possibly a railroad barn where 33 Polish immigrants were living in squalor, in cramped quarters, because they were poor and housing was unavailable. So there’s the potential to learn about the experiences of the early wave of Polish immigrants to Hamtramck.”
The site spans three parcels of land on Denton Street, just east of Jos. Campau. The property is owned by Hamtramck Recycling, which has agreed to allow the students to do the dig. They will be on-site until mid-November, carefully sifting through selected places.
“The Denton Street site is part of the Old Hamtramck Center,” Ryzewski said. “The historic buildings in this area had been lost to the expansion of industrial facilities in the area.
This is the first time we’re digging at the Denton Street site, so we’re still in the early stages of piecing together the history of the three different parcels and the associated buildings that once stood in the area.”
Hamtramck grew north from the south, particularly in the late 19th century even before the village of Hamtramck was formed in 1901. It was a time when heavy industry was moving into the area, transforming it from farms and wilderness to factories, houses and stores.
Charles Faber (of Faber Street) operated his saloon near here when Jos. Campau was a dirt road. Remnants of the heavy industry, including a Briggs Company building, can be found on the site.
Rusted railroad tracks and crumbling rail ties still run parallel to the existing tracks. All kinds of debris can be found through the area, including tantalizing relics of a saloon that stood exactly on the site 120 years ago.
“We’re excited to learn how the artifacts that we excavate also relate to the rapid growth of Hamtramck in the 1910s – in response especially to the Dodge facility, located just a block to the south,” Ryzewski said.
That closeness to the Dodge Plant also caught the attention of student Tobias Ellis.
“The proximity to Dodge Main is exciting,” Ellis said.
Searching for treasure is not on the agenda, but Ellis couldn’t help but note that just digging at the site was promising.
“It’s like we hit gold a little bit,” he said.
The items can give valuable clues to what life was like in Hamtramck at that critical period when the town was undergoing a traumatic transformation into an industrial city.
“We’re hoping to learn more about the experiences of the immigrants and other newcomers to Hamtramck at the turn of the 20th century and through the 1930s,” Ryzewski said.
Student Brittney Eastin said the project was promising. “I hope to get insight into what life was like then. What the Prohibition era was like, and the people who experienced it.”
All the students are part of Ryzewski’s class on Archaeological Field Methods, which focuses on the fundamentals of archaeology including surveying, mapping, excavating, documentation, artifact identification and interpretation.
They also will learn the proper methods to make their way through waist-high weeds, and how to dig up the dirt.
Once the excavations are done, the material gathered will be taken to the WSU archaeology lab where they will be inventoried and cleaned. The items will be studied and then presented to the public in a special display to be held beginning Dec. 13 at the Hamtramck Historical Museum, which will be their eventual home.
This is the third archaeological dig Wayne State has done in Hamtramck. The other two were at the site of the old Village Hall on Jos. Campau between Grayling and Alice streets. This “new” site is potentially an even richer repository of Hamtramck’s past.