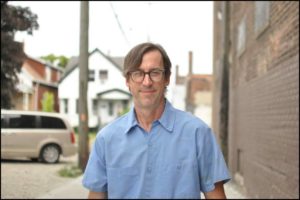 Steve Hughes lives in Hamtramck, and the city and its people provide a backdrop to many of his stories. Photo by Mira Hughes

By Alan Madlane
Local resident Steve Hughes must be a pretty interesting guy. That’s a conclusion easily reached once you start reading about his background.
A Hamtramck resident, Hughes is probably best known to townies as the co-founder of the Public Pool art space on Caniff St. at Gallagher.
Serving as both art gallery and performance-slash-meeting space, Public Pool has been packing them in since 2010, in a way that manages to be both cozy (the space is small as galleries go) and yet showy (the big glass window façade, bright lights and hipsters spilling out the doorway make it hard to miss).
But, as with so many art types these days, Hughes is a multi-faceted threat. He publishes a zine called “Stupor,” filled with literary pieces culled from his gentle eavesdroppings on local barflies; runs the Public Pool; works on his books of stories; and is always scoping the city for more.
We caught up with Hughes by email.

Review: So, you’ve got a new book out, “Stiff” (which is published by Wayne State University Press). A big achievement, even as a collection of smaller pieces brought together. First off, how far back do these stories go?

Hughes: I wrote the first story in this collection back in 2010. This is the one that talks about the armored truck driving down I-75 between Caniff and Clay that somehow didn’t get locked right and loses a bag of 100 dollar bills which hits the pavement at 70 mph, scattering everywhere, causing all sorts of happy chaos. The story also refers to the bum-deal closing of American Axle’s Hamtramck factory and wraps up on a stool at Kelly’s Bar.

Review: When you were writing them, was it always with the idea of putting together a book, or did that occur to you somewhere along the way?

Hughes: I did think it was important that the stories fit together as a book. So, I kept the setting for most of the stories in Hamtramck and Detroit. Many of them take place either in our neighborhood houses and streets, or at various bars around town like Motor City Sports Bar, New Dodge Lounge, Kelly’s, and Baker’s Streetcar.
Review: Your writing and subject matter remind me a bit of Raymond Carver, albeit somewhat less dark or cynical. Who are your favorite writers? Do you feel consciously influenced by any of them, or not particularly?
Hughes: I have read everything by Raymond Carver. He’s great. I like it that he’s a poet as well as a fiction writer. Seems to me that having a background in poetry helps a writer to pay more attention to their word choices, and to the sound of the story as well. I mean like how it sounds when it’s read aloud. I also really like the writers Barry Hannah, Denis Johnson, and my old professors Janet Kauffman and Jack Ridl. Yes, I am consciously influenced by them all.

Review: How is the book being received? What platforms have you made it available to?

Hughes: I’m still waiting for more reviews to come in. So far, Booklist really liked it. They said, “Hughes’ debut is fun and adventurous, an imaginative barrage of raw emotion.” I was really pleased about that. I’m happy that you can buy the book at just about any online book-seller, like Amazon or Barnes and Noble. Though what I’d really recommend is buying local. Bank Suey should have it by now. Also, there’s Pages Book Shop in Detroit and Book Beat in Southfield.

Review: Are you part of a larger writing community locally, say with some of the other folks that have given readings at Public Pool for example? Do you ever collaborate directly with other writers, or have any future plans to?

Hughes: I read the stories in the book at The Good Tyme Writers Buffet. That’s my potluck/literary series that I run out of the Public Pool. The whole reason for starting this series was to try to build a community of writers here in Hamtramck.
Over the years, we’ve had 100-plus writers reading and eating there together. Mostly though, my collaborations are with artists. We work together at the gallery and also on my zine “Stupor.”
Oh, and over the past two years I’ve had the pleasure of collaborating with the actors at Planet Ant who built performances around “Stupor.” They are terrific. Shout out to Planet Ant!

Review: Do you have plans for another book of your own, and if so, more of the same, or something off on a different tangent?

Hughes: I’m working on a series of stories that reads as a novel, set in the small city of Jugville, Michigan; also a Hamtramck-based book of bar room poetry, and of course more issues of “Stupor” are forthcoming as well.

Review: Lastly, anything of note coming up at Public Pool before or around the new year?

Hughes: We’re having a fundraiser at the gallery in January. We’ll be asking over 100 artists to donate work which celebrates the rooster, very much like the one on the cover of my book.
The show is titled “Night of 1000 Cocks.” We’ll be selling the art for only $40 a piece, so it will be affordable for the community, and hopefully will help us fill coffers so that we can continue showing great art, on and on into the future.