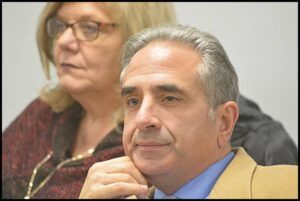 City Attorney James Allen may have to step away from his duties for the city and allow his law firm to continue to represent the city. He has come under criticism for a series of emails he sent to a government watchdog.

By Charles Sercombe
Did Hamtramck City Attorney James Allen commit a career-ender?
That may be the case, according to city hall sources in response to a federal lawsuit filed against Allen and the City of Hamtramck by a self-described government watchdog.
Known for his sharp tongue and short temper, Allen sent Charles Blackwell a series of angry emails that taunted and ridiculed the paralyzed man, who lives in Farmington Hills.
Blackwell, 28, said he was shot in a drive-by shooting, and can no longer walk. In his lawsuit, Blackwell said Allen’s emails started after he had been prevented from commenting on political matters in Facebook pages for Inkster.
Blackwell had accused the mayor of Inkster for being involved in an embezzlement scheme. The mayor of that city has denied the accusation, and has not been charged with any crime.
Allen’s law firm acts as the city attorney for Inkster.
In Allen’s emails, which Allen admitted to The Review that he wrote, he ridiculed Blackwell’s paralysis, calling him “pathetic little wheel boy.”
Other emails included these taunts:
• “I love to walk. And run. And do things that others can’t. God doth have a great sense of humor and, in your case, a keen sense of justice.”
• “I won’t be thinking of you later tonight when I do that thing that you can’t.”
He also referred to Blackwell by a common nickname for Charles as “Chuck who can’t ****.”
Allen also boasted about the money he has made from Blackwell and others who make legal challenges.
“We love people like you. My children thank you, in fact, for the college money. From the bottom of my satisfied self’s contended heart, thank you for the many hours you keep my colleagues occupied.”
The spat between the two blew up when Blackwell, in what he called “political satire,” superimposed Allen’s face, as well as the faces of two other colleagues, onto the body of a woman posing in front of the Frank Murphy Hall of Justice in downtown Detroit.
In a press release issued by Allen’s law firm, he said:
“I can explain what led me to the point of stupidly using inappropriate and hyperbolic language directed at Mr. Blackwell, but I cannot excuse it.
“I resorted to language born of frustration built up over 18 months, but I do not condone and I apologize for the language I used. I was wrong.”
The law firm further said that Blackwell “terrorized the staff of Allen Brothers PLLC and our municipal clients, filed an unbelievable number of frivolous and dilatory lawsuits against cities across Metro Detroit, and otherwise sought to harass the members of this firm.
“This piled unreasonable burdens onto many public employees as they worked hard to serve the public through the COVID-19 pandemic. Nearly every day for those months, the firm — and Michigan taxpayers — have exhausted many resources responding to his campaign.
“This included a phone call to James Allen Sr. deriding Mr. Allen’s late father, less than an hour after his obituary was posted, as well as phone calls to Mr. Allen disparaging his partner, children, and other family members in highly sexualized, charged, and offensive terms.”
Blackwell, using several aliases, has also called in to Hamtramck City Council meetings during public comment to disparage Allen.
Blackwell included the City of Hamtramck in his lawsuit because Allen identifies himself as the city’s attorney.
This has led to Hamtramck City Manager Kathy Angerer telling the mayor and city council that Allen has to take a leave of absence, although she still wants to retain Allen’s law firm to continue representing the city.
Attorneys from Allen’s law firm have periodically represented Hamtramck in the past.
For Hamtramck Councilmember Carrie Beth Lasley, she prefers to fire Allen and his firm and look for another law firm to represent the city. But in a press release she issued this week, she said she “learned” there was not enough support from other councilmembers, which she described as “all male.”
She further criticized a “majority” of her council colleagues as being “not offended enough by Mr. Allen’s approach to practice, the language used, or the victim-blaming statement released by Allen Brothers, PLLC, to consider voting Yes to her first two resolutions.”
Those resolutions were to find a way to fire the law firm, and then go about hiring someone else for legal services.
With no apparent support from her council colleagues to fire Allen’s law firm, Lasley is now proposing resolutions “to reinstate Mr. Allen as city attorney, and another to cover the legal defense for actions the city attorney in defense of the city for which the Council has approved invoices.”
She justified this about-face saying:
“If this is who we support as a council then I think it is important that we are clear about where we stand, and not leave Mr. Allen’s fate in doubt.
“As a Councilwoman, it is also important that I make sure our taxes purchase the maximum legal resources for our community, which the leave of absence implemented unilaterally by the city manager fails to provide.
“If this is the work product that we pay for we have an ethical obligation to take responsibility for the legal services that we have contracted, paid for and publicly supported. Anything else is unfair to Mr. Allen. If this is who we want as our contractor, then I believe we have a duty to stand by his work, which was approved for payment at the last meeting.”
The next city council meeting is this coming Tuesday, Oct. 12 at 7 p.m.
The meetings are still held via Zoom, and can also be viewed on the city’s Facebook page.
A petition is being circulated on various Hamtramck-related Facebook pages to fire Allen.
Posted Oct. 8, 2021