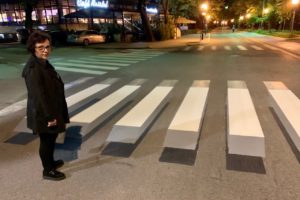 Hamtramck will soon be part of a growing number of communities that have taken a novel approach to slowing down traffic. Look for several 3-D illustrations to be created at key crosswalks.

By Walter Wasacz
Last week Hamtramck took an innovative first step forward to increase pedestrian safety on the city’s streets.
In a joint meeting of the common council and the board of education, the two local public bodies unanimously approved a pilot project to install 3D crosswalks at four intersections along the Gallagher corridor.
The intersections are, from north to south, at Casmere, Caniff, Evaline and Holbrook. Gallagher was chosen for the collaborative pilot program because it connects three public schools — Hamtramck High, Dickinson East and Tau Beta — and is heavily used by pedestrians on their way to and from restaurants and markets on Caniff and Holbrook.
The implementation of the 3-D design is thought to be the first of its kind in Michigan. The crosswalk designs have been popping up across heavily-populated cities in central and south Asia, where fatal crashes between motorists and pedestrians are among the highest in the world.
They are also being used in Iceland and Bosnia, where Hamtramck business owners Zlatan and Indira Sadikovic (pictured) last month chanced upon the painting of a 3-D crosswalk in Sarajevo.
The crosswalks appear to be raised above the ground, an illusory effect that signals to motorists that they are approaching a pedestrian crossing.
According to state law, people using crosswalks have the right of way to cross there and motorists must yield or stop for them.
Signage alerting drivers to the law are usually installed in tandem with the crosswalks.
The cost of the project will not exceed $25,000 and will include a $12,500 contribution from the school district and $12,500 from the city.
Estimated costs for 3-D painting is $26 a foot. City manager Kathy Angerer said the job will be put out for bid. “Not many companies in
Michigan are doing this kind of work,” Angerer said. “We will go with the best bid, not necessarily the cheapest.”
In addition, the joint body supported installing vertical traffic bollards at Lumpkin and Norwalk and Lumpkin and Edwin to deter hot rodding near Pulaski Park.
The resolution referred to the City of Hamtramck as being “known for its walkability and residents in our community walk for exercise, fun and many walk to school, walk to work, walk to parks, or walk to shop on a daily basis.”
It went on to underscore a “deep commitment to education and safe behavior for pedestrians and motorists and creating a safer, more walkable community — not only for our children, but for all members of the community.”
The 3D crosswalks are expected to be phase one of several road safety projects discussed in meetings between outgoing schools Superintendent Thomas Niczay and Angerer.
Other problem areas identified include the streets that border Pulaski Park and Mackay between Caniff and Carpenter, a stretch of road near Kosciusko Middle and Dickinson West Elementary schools.
There is also a shortage of speed limit signage throughout the city. The speed limit is 25 mph on all streets, unless marked.
No street in Hamtramck has a speed limit above 35 miles per hour (mph), yet motorists on Gallagher and other roadways commonly exceed 50 mph.
There has been a rash of motor crashes into utility poles and buildings in recent years, including a pole that was severed last week on Commor near Conant. The crash resulted in a power outage for a number of residents and businesses.
Jan Vujic, a teacher who attended last week’s meeting, said she canceled an annual spring student walk for fear of speeding drivers around the Kosciuszko/Dickinson West building on Burger near Mackay.
There was a video posted on Facebook of teen drivers doing donuts and “yo-yos” in a parking lot the night of high school graduation. Some who responded to the thread said the cars were likely rentals, but neither that information nor the location of the incident could be independently verified.
The meeting was significant for another reason: the spirit of cooperation between city and public school officials.
Both public bodies are looking for ways to find new funding sources to replace expected shortfalls from the imminent closure of the General Motors Detroit-Hamtramck Assembly Plant and Wayne County’s Dickerson Jail.
Discussions between Angerer and Niczay began earlier this year, resulting in the joint meeting between councilmembers and board of education trustees.
“Partnerships are everything,” Niczay said at the meeting, which was held at the Hamtramck Public Library. “Partnerships are the future.”

Hamtramck native Walter Wasacz walks the city streets day and night and writes about it for the Review.
June 21, 2019

4 Responses to City Life: City and schools walk the talk on road safety