Detroit area is one of the worst for pedestrian safety 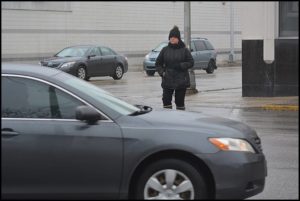 The Detroit area has some of the worst drivers in the nation when it comes to pedestrian safety. The intersection of Jos. Campau and Holbrook remains one of the city’s most challenging for pedestrians to cross.

By Charles Sercombe
According to a national study on pedestrian safety, Michigan has some terrible drivers.
The “Dangerous by Design” report published by Smart Growth America says Michigan is the 19th-worst state when it comes to pedestrian safety.
According to the report, from 2008 to 2017 there were 1,409 pedestrian deaths in the state. The worst parts of the state are in Detroit, Dearborn and Warren.
Florida, home to seniors who perpetually keep their turn signals on, not surprisingly has the most dangerous drivers in the nation.
While Hamtramck has not experienced a pedestrian death in years, every week we have several crashes, hit-and-runs, and, yes, vehicles hitting pedestrians.
A number of years ago, a state insurance study ranked the intersection of Holbrook and Jos. Campau as one of the worst in the state for pedestrians.
The main cause for this is the distance from one corner to the other.
Basically, the light turns from red to green before many folks can get to the other side.