Hamtramck Schools get a big boost 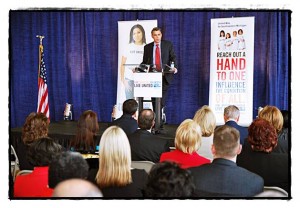 It’s no secret that the graduation rate for Hamtramck Public Schools is not great.

But that’s about to change for the better, and in very dramatic terms.

Hamtramck High School is one of seven schools that will receive special help from United Way for Southeastern Michigan.

The program will focus on increasing the graduation rate. The program is being funded by a $27.1 million grant from the General Motors Foundation. Officials from GM and United Way met at a major press conference last Thursday in Hamtramck High School to announce the grant.

The program also includes setting up a small learning academy and an early childhood center to augment the district’s normal education services.

“Our community is facing many challenges but one of the most important is ensuring that our young people enter kindergarten ready to learn and at the very least they obtain a high school degree,” said Michael Brennan, President and CEO of United Way. “We are now in a much better position to meet this challenge thanks to the unprecedented support from the General Motors Foundation.”

Hamtramck School Superintendent Tom Niczay said the program budget for the district is $50,000, although no money will be directly funneled into the district.

Niczay praised the program, saying it will give students an extra edge in an ever-increasing competitive job market.
“I’m excited for the kids,” Niczay said.

Niczay added that the program will likely be up and running by next fall, or at least by next January. Details of the program have yet to be worked out.