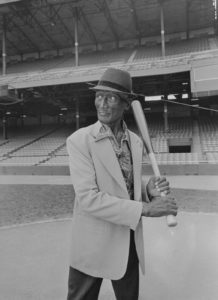 (Hamtramck’s historic baseball stadium was the home of the Detroit Stars back in the 1930s. The team was part of the Negro National Baseball League. A number of legendary players once graced the field, including Norman “Turkey” Stearnes.)

By Dave Mesrey
Special to The Review
Every picture tells a story, and this one is no exception.
In the summer of 1979, a group of aging African-American ballplayers gathered in Greenup, Kentucky, at the home of newspaper publisher Tom Stultz for the first annual Negro Leagues baseball reunion.
What started out as a birthday party for Clint “The Hawk” Thomas turned into a full-fledged reunion featuring the likes of Ray Dandridge, Buck Leonard, Buck O’Neil, and Judy Johnson.
Former Detroit Stars center fielder Norman “Turkey” Stearnes made the trip from Detroit, traveling by plane for just the second time in his life.
The Nashville native, then 78, had retired to Detroit, where after his baseball career he’d worked for nearly 30 years in the foundry at the Ford Motor Company’s storied Rouge complex.
It was there at the Rouge in the 1950s, long before there was a Motown Records, that Stearnes worked alongside a young Berry Gordy.
Stearnes, a prolific home-run hitter who starred for the Stars in the 1920s and ’30s (first on the city’s east side at Mack Park, and later at Hamtramck Stadium), was a man of few words.
He let his bat do the talking.
Stearnes was “one of the greatest hitters we ever had,” Satchel Paige once said. “He was as good as Josh [Gibson]. He was as good as anybody who ever played ball.” 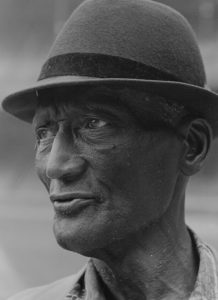 “Turkey Stearnes was a five-tool player and one of the greatest power hitters in baseball history — not just Negro League history,” says baseball historian Gary Gillette. “There’s no doubt that he would have been a superstar in Major League Baseball if he had been allowed to cross the color line.
“Tragically, he received his due way too late, decades after his death, when he was inducted into the Hall of Fame.”
When Detroit Free Press sportswriter Joe Lapointe got home from the Negro Leagues reunion, he and Freep photographer John Collier invited Stearnes to a photo shoot at Tiger Stadium, where Stearnes was never allowed to play because of the color of his skin.

No one knew it at the time, but in the summer of ’79 Turkey Stearnes was gravely ill.
“That was the last time with my dad before he passed,” said Stearnes’ daughter Joyce Stearnes Thompson. “He looks so frail, but it was a glorious moment — a moment he had been denied.”
Collier’s signature photo from that day eventually made its way to Cooperstown, when Stearnes was posthumously inducted into the Hall of Fame in 2000.
Taking his stance at home plate, his bat softly cradled in his massive hands, Stearnes cast his gaze deep into the outfield, where he sat as a spectator for so many days in the bleachers in the 1950s and ’60s.
“In his eyes, you can see the story of the Negro Leagues,” said Gillette, founder and president of the Friends of Historic Hamtramck Stadium. “It’s the triumph of determination over discrimination, and the triumph of dignity over despair.”
Standing in the same left-handed batter’s box once occupied by his white crosstown contemporary Ty Cobb, a dying Stearnes stares stoically into center field.
He is the luckiest man on the face of the earth.
“I remember his hands — he had very large hands, and the way he gripped the bat, you could tell he was a pro,” said Lapointe. “I remember he was dressed really sharp. He still had an athletic physique, and his clothes brought that out. The magic moment … was when he picked up the bat and took his stance in the batter’s box. … He just snapped back into this batting stance, and he looked like a power hitter for sure.”

“Dad would always wear clothes that were a little too big for him,” said daughter Rosilyn Brown. “But we wanted him to look sharp, so we went to Sears and got him something that really fit.
“I let him pick out his shoes, and he came back with a pair of house shoes. I said, ‘Dad, you can’t wear house shoes to the reunion!’”
Collier was sifting through his photo archives recently when he made a remarkable discovery: two never-before-seen pictures of Turkey Stearnes from that fateful day at Tiger Stadium. 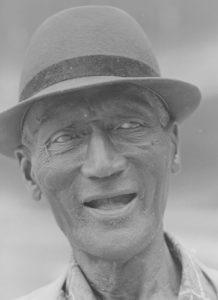 “John Collier was excellent,” Lapointe says. “He’s very imaginative, and he sees things with a good eye. He’s aware of more than a lot of photographers, and he sees a picture where some don’t.”

“Dad didn’t laugh a lot,” Thompson said, “so that visual gives me some closure. It feels good to see my dad smiling.”
“I loved to see Dad smile,” says Brown. “I think he was smiling because he was happy he finally got a chance to swing his bat at Tiger Stadium.”
(Dave Mesrey is a local writer and a huge baseball fan. This story first appeared at the blog: hamtramckstadium.blogspot.comin. That was in 2018. It is being reprinted here with his permission.)