Record Store Day celebrates all things that spin around 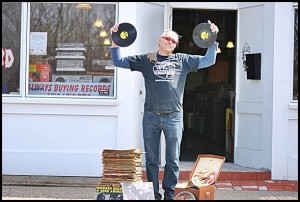 Jeffery Garbus, the owner of Record Graveyard on Carpenter, is ready for Record Store Day this Saturday.

Record lovers, tomorrow is your day.

And Hamtramck is well stocked for the annual worldwide Record Day celebration taking place everywhere that there are vinyl records to be purchased.

On Saturday, Hamtramck’s three independent record stores will open their doors to what’s hoped to be a throng of shoppers.

At Detroit Threads, 10238 Jos. Campau, owner Mikel Smith will once again host a day-long record spinning party with DJ’s from Detroit Militia slapping down the vinyl, starting at noon.

Here’s the line-up so far:

As the name implies, at Detroit Threads you can not only shop for records, you can also check out some pretty cool clothing, most of it gently used and all of it nicely priced.

The selection of records ranges all over the place including rock, soul, electronic, hip hop, blues and on and on. 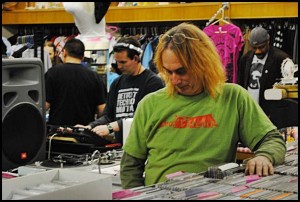 Mikel Smith, the owner of Detroit Threads, will host a rotating group of DJ’s for Record Store Day.

Just a block or so down the street is Lo & Behold, at 10022 Jos. Campau. The store is a newcomer to the Hamtramck shopping scene, opening about two years ago.

Inside is a record hunter’s dream, packed with crates and crates of albums. Besides records, there are a ton of other items or peruse, including clothing and “books, lots of books,” said owner Richie Wohlfeil.

Owner Jeffery Garbus remodeled the inside of the former neighborhood market, which is attached to his house in the back. Once again, you’ll see records crammed everywhere, making record shopping in Hamtramck a hunter’s paradise.

Garbus is discounting his merchandise by 20 percent. He also has some special releases made just for the day. In the spirit of things, The Review copped a two-single issue of some rare Seeds (of “Pushin’ Too Hard” fame) sides.

Record Store Day has grown by leaps and bounds since starting out in 2007, which some say is not necessarily a good thing.

Garbus griped that the celebration has now been taken over by “record labels.”

It’s now to the point where outlets have to sign up to be a part of a distribution network. On Record Store Day, many artists release special, one-of-a-kind vinyl issues.

This year’s “Ambassador” for Record Store Day is Detroit native Jack White, who is no stranger to special releases and Hamtramck.

White now lives in Nashville and has his own record label, Third Man Records, which specializes in vinyl. White’s original band, the White Stripes, got their start at the Hamtramck Blowout years ago.

And if you are lucky enough to be in Nashville on Saturday, be sure to stop by White’s store where you can cut a live recording of yourself in an old-fashioned recording booth.

What in the world are we talking about? Go see for yourself at thirdmanrecords.com.