Tax delinquency may come back to bite mayoral hopeful 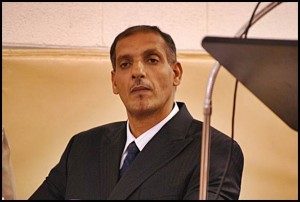 This could be a potential game changer in the mayoral election.

On Friday (Aug. 9), three days after Tuesday’s Primary Election, it came to The Review’s attention that leading mayoral candidate, Abdul Algazali, is apparently two years behind in property taxes for two buildings he owns on Jos. Campau.

Both properties have been “forfeited” and are “subject to foreclosure,” according to the county.

So, how does any of this potentially alter the mayor’s race?

According to the City Charter, on page 11, Section 6-08, any elected official who is in default to the city will have their election votes be termed “void.”

“No person shall be elected or appointed to any office who is a defaulter to the City or to any board, or office, or department thereof, or to any school district, county, or other municipal corporation of the State, now or heretofore existing. All votes for the election or appointment of any such defaulter shall be void.”

The charter does not define what being a “defaulter” means, but in a number of dictionary definitions it includes being behind on financial obligations.

Algazali, who is currently a city councilmember and mayor pro tem, did not return calls for comment. 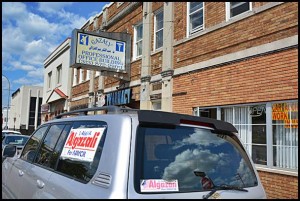 Mayoral hopeful Abdul Algazali owes over $9,000 in property taxes for his building at 9222 Jos. Campau, according to the Wayne County Treasurer’s Office. That could mean Algazali’s election votes are voided, according to a provision in the city charter.

City Councilmember Robert Zwolak was a member of the Charter Revision Commission when that provision was adopted. He said it’s likely it was taken from other city charters.

Asked what he thought the word defaulter means he said: “Basically someone who has an obligation to the city that is past due.”

Zwolak pointed out that when a business goes to renew its business license with the city clerk, all bills owed to the city, such as water and taxes, must be paid up before the license is issued.

As for Algazali running for mayor and being behind two years in property taxes, Zwolak said “He’s not a person who should be in a position to tell people what they can or can’t do.

Acting City Manager Kyle Tertzag said the city had been unaware of the delinquency, but the information has been forwarded to the city attorney for review.

“It’s important that we follow the law, and we will do so,” Tertzag said.

He declined to elaborate.

Mayor Karen Majewski, who finished 61 votes behind Algazali in last Tuesday’s Primary Election and will square off against him in the November General Election, said that even if the city attorney decides there is no action to take, Algazali is not going to look good.

“Anybody who owes the city money ought to be ashamed of themselves,” she said.

Another lingering question is, if Algazali’s election results are thrown out, does that mean the third-place finisher, John Ulaj, automatically moves up to the number two spot to face-off with Mayor Karen Majewski in the November General Election ballot?

(Disclaimer: John Ulaj is the owner of The Review.)

The charter does not speak to the issue of what happens after a candidate or elected official’s election results are voided. Another possibility is that Majewski runs unopposed.

Algazali, a chiropractor, has consistently voted against tax and fee increase proposals while on city council, and in his campaign literature for the primary election prominently mentioned that.

You can look up the information at http://www.waynecounty.com/treasurer/

Once you get to the page, scroll down to the box that says “pay property taxes” and click the online button. You will then be asked two questions and hit “enter site” on the first page that comes up and “accept disclaimer” on the next page that appears.

Once you get to the address finder page, type in the street address and for the street name type: jos campau — with no period after jos.)