The Lore of Hamtramck … A memorable meeting with Mrs. Roosevelt 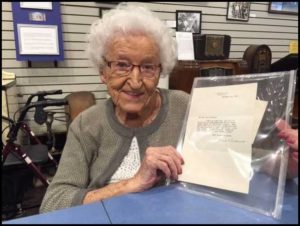 The cover of a newly published book of short stories by local author Steve Hughes.

By Greg Kowalski
“It was terrific!”
That’s how Helen (Grudzien) Livingston remembers the day in 1936 when she presented a bouquet of roses to Eleanor Roosevelt, First Lady of the United States and wife of President Franklin Roosevelt.
Recently, Helen, who just turned 100, visited the Hamtramck Historical Museum to recount her memorable meeting.
The presentation took place at the Masonic Temple in Detroit, but the roots of the 47 yellow roses she presented to Mrs. Roosevelt were drawn straight from Hamtramck. (By the way there were supposed to be 48 roses, but Helen kept one as a souvenir.)
In October of 1936, President Roosevelt paid a visit to Hamtramck to dedicate the new stadium, which was being renamed Keyworth Stadium. The stadium was paid for in a large part with Works Progress Administration funds.
Roosevelt wanted to promote that, plus Hamtramck had a large population that voted solidly Democratic and usually had a 90-plus percent voter turnout at elections.
Coincidentally, Helen grew up on Playfair Street, which led up to the stadium and was soon renamed Roosevelt Street in honor of the presidential visit.
Helen remembers seeing the president drive by.
About a month later, Eleanor Roosevelt visited Detroit to promote girls’ sports. Helen was the captain of the championship Hamtramck High School girls field hockey team, and she was invited to meet with Mrs. Roosevelt on stage at the Masonic to receive a scroll imprinted with the names of the field hockey team.
“I think that Mrs. Roosevelt was too-o divine,” Helen was quoted as saying in a newspaper at the time. “She is such a splendid lady, so generous and pleasant. Meeting her has been the greatest thrill of my life.”
Looking back, Helen further described the experience as “a thrilling day.”
The years have not dimmed her faculties. She remembers Mrs. Roosevelt as being “very gracious.” She added, “She was very nice and sweet.”
And she wore dazzling jewelry, Helen said.
A short time later, Helen received a letter from Mrs. Roosevelt. It said: “I want to thank you, and all the members of the Hamtramck High School Field Hockey Squad, for the lovely flowers. They were a real joy to have and I think you were all more than kind to send them to me. I am also pleased with the delightful greeting card and I think it is very cleverly done.”
Helen still has the letter.
After graduating from HHS Helen got a job at the Parke-Davis pharmaceutical company in Detroit. It was there she met Roy Livingston, and they were married in 1949. They soon moved to Detroit, then East Detroit (now Eastpointe) and had several children. Roy died in 2009. They had been married for more than 59 years.
It would be an exaggeration to say that Helen today (she turned 100 on Jan. 2) has the energy that she had when she met Mrs. Roosevelt. But there’s still a youthful gleam in her eyes that shines especially brightly as she holds the letter from Eleanor Roosevelt.
You can learn more about Hamtramck’s great history at the Hamtramck Historical Museum, 9525 Jos. Campau. Hours are 11 a.m. to 4 p.m. Saturday and Sunday and by appointment. Call us at (313) 893-5027, or email at:
hamtramckhistory@gmail.com.

One Response to The Lore of Hamtramck … A memorable meeting with Mrs. Roosevelt