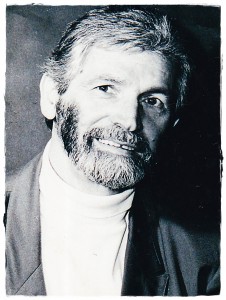 George Cvetanovski must be lucky, or else have great genes.

Or, he’s a testament to the healthful powers of soccer playing and Macedonian beer.

Cvetanovski, a first-generation Macedonian American and the sole owner and operator of the 7 Brothers Bar for almost 35 years now, celebrated a milestone birthday this past Friday, in a bar filled with his loyal subjects: Actors, and others, from Hamtramck’s arts community.

His energy level matched those around him well, these other 100 or so folks that came and went, whose average age probably hovered around 30 – young enough to be his grandchildren (this reporter excepted). For although George Cvetanovski was turning 80 on this night, he surely didn’t look much over about 65.

The jukebox blared as per usual, and folks tried to squeeze in a game of darts amid the crowd. The many, many actor headshot photos that line the wall here – yours truly’s among them – seemed to stare down in approval at the melee below.

Actress and comedienne Jaime Moyer, still back visiting here from her L.A. transplant, worked the bar as in the old days, and a slew of faces familiar to the town’s theater community spilled out on the sidewalk to smoke, noshed on some food, or chatted loudly in pairs or small groups.

Cvetanovski’s bar is an old-time watering hole. Although there are grills, no food is cooked here. Even tonight, the food comes from Jet’s Pizza and elsewhere. But there are the aforementioned darts, and there is pool, and there is above all that outstanding jukebox.

And there is George. Lean and wiry, he almost looks like he could still get back out there on the footie pitch and swat away a few “benders.”

But, for now, he’s seemingly in his glory – tending bar, not goal, at his self-modeled “Home of all Arts.”