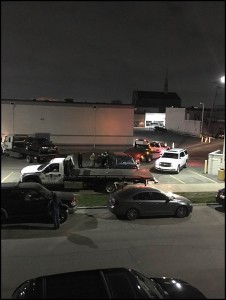 Three tow trucks from Breakthrough Towing surround a car to apparently prevent the owner of the car from moving his car out of the CVS lot on Holbrook and Jos. Campau. Photo by Tia Krawczyk.

Update 3: Well, well, well, someone finally stepped up to the challenge to remove Breakthrough Towing Service signs at CVS. And that someone is City Councilmember Ian Perrotta, who also happens to help out here at The Review with proofreading. Breakthrough can no longer tow cars from the lot, and the people who park in the lot to go to Bumbo’s Bar no longer have to fear getting their cars towed. If a Breakthrough driver does attempt to hook up a car, call 911 immediately and report a car theft in process. (May 16, 2018)

Update 2: Anyone handy with tools? The CVS store manager, Mike Raynor, is inviting anyone to take down the Breakthrough Towing signs. Raynor said he tried to take them down but couldn’t because of the way there are bolted into the back parking wall and on the store dumpster. If you get them down, you can turn over the signs to Raynor.

Update: It’s now up to the manager at CVS Pharmacy to take down the Breakthrough Towing Service signs.
Hamtramck Police Chief Anne Moise told The Review via email that Breakthrough claimed it had a contract with CVS to provide towing services. But, she said, the company has failed to show a copy of the agreement.
The manager of the CVS, Mike Rayner, told Moise that he is “not aware of an agreement between CVS and Breakthrough.”
Moise said CVS corporate officials say “it is up to the individual local stores to control their own parking lots.”
Moise said it’s now up to Rayner to remove the tow company’s warning signs.
“The local manager advised he would look into having the signs removed, however as of today’s date the signs are still in place.” Moise said. “It is up to the local store to decide if they are going to remove the signs or not.”
Once the signs are gone, the company will not have the legal right to tow away cars after the store closes. The tow signs warn that anyone who parks in the CVS lot after hours is subject to being towed at the owner’s expense.
The Review called Rayner on Thursday (May 10) to find out what he plans to do but he was not available for comment.

By Charles Sercombe
If you park in the CVS parking lot at night during the weekend – after the store is closed — there is now a good chance your car will be towed.
The owners of Bumbo’s Bar, Tia and Brian Krawczyk, say their customers who park in the lot have been targeted in recent weeks.
The bar is located at Holbrook and Mitchell, across the street from CVS. Posted on the bar’s entrance door is a warning for customers to not park in the CVS lot.
But apparently not everyone notices the warning.
Last Saturday night, witnesses say five tow trucks from a Detroit company called Breakthrough Towing were lined up waiting to hook up cars and tow them away.
In some instances patrons at the bar were alerted before their car was towed out of the lot and for about $250 they could pay the tow driver to unhook the car and allow them to park somewhere else.
For those not lucky enough to catch the tow driver before leaving the lot, it cost them anywhere from $400 to $500 – in cash only – to retrieve their cars from the tow company’s lot.
It is unclear if this towing practice is legal.
The tow company has two signs on the back wall of the parking lot and one on the fence surrounding the CVS dumpster stating that those who park in the lot who are not doing business at CVS will get their car towed at any time.
CVS also has signs warning people not doing business there that their cars can be towed.
But just who authorized Breakthrough Towing to install their signs and tow away cars is unclear.
The store manager of CVS, Mike Rayner, told The Review he did not authorize Breakthrough to tow away cars.
“They have nothing to do with us,” Rayner said.
Rayner, who has worked at the Hamtramck store for two years, even said he was unaware that Breakthrough has signs on the CVS lot.
The Review attempted several times to reach a manager for Breakthrough but was unable to contact him. Each time we called the people who answered told us to call back at a specific time, but the manager was never there. At one point a recorded message said the phone number was not in service.
The Review left a phone number for the manager – who was only identified as John – but he never called back.
Bumbo’s Bar owner Tia Krawczyk said the issue is about CVS being a good corporate neighbor.
“Our biggest concern is for everyone’s safety,” she said.
Krawczyk also says there is an issue with the placement of Breakthrough’s warning sign. According to state law, she said, a sign needs to be at all entrance ways, which they are not.
“We’re at the mercy of corporate CVS to hire an ethical tow company that will provide proper signage and follow the laws,” Krawczyk said.
Acting City Manager Kathy Angerer said she has asked Police Chief Anne Moise to look into the matter.

The parking lot issue is even more clouded.
Rayner insists the parking lot is actually owned by the city and that CVS pays the city rent to use it. But Acting City Manager Angerer says that CVS is the owner of the lot.
The Review reached out to CVS headquarters via email but no one replied.
The behavior of Breakthrough drivers has also become an issue. Krawczyk took a photo of three tow drivers apparently blocking in a car to prevent the owner from driving away.
The company has received scathing reviews from Yelp.com, an online site that consumers use to rate their experiences from a wide variety of companies and services.
Breakthrough has a rating of one star out of five. One person said they wish they could give the company five negative stars.
Another accused the company of being “a total scam” because the company towed a car whose owner had permission to park in a lot.
The company has also been aggressive in towing away cars from a McDonald’s restaurant on Woodward in Midtown Detroit.

34 Responses to Towing company under fire