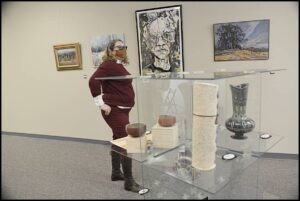 Colleen Kelly takes a look at a current exhibit at the Ukrainian Museum that highlights local artists.

By Alan Madlane
There’s still some time to catch the latest exhibit at the Ukrainian Museum here in Hamtramck.
Dubbed “A Winter Exhibit: Ukrainian American Artists,” the exhibit continues until Feb. 5.
The exhibit had its opening on Dec. 11, and has been up since then. The museum is open right now on Wednesdays through Saturdays, so you have about half a dozen more chances to catch these artworks.
Note, however, that one wishing to see the exhibit needs to call (313) 366-9764 to schedule a viewing. They are running a timed ticketing, to insure small amounts of people in the building at any given time.
Temperatures will be taken at the door, along with information for any necessary contact tracing. Masks will be required to be worn, and patrons are expected to observe proper social distancing etiquette.
The hours you can schedule a visit are from 10 a.m. until 5 p.m., Wednesday through Saturday, except this Saturday, Jan. 30, when the museum will close at 2 p.m.
The exhibit features 14 past and present Ukrainian-American artists whose works are in a variety of media, including oil and acrylic painting, ceramic pieces, sculpture, religious icons, gourd work, and print.
The involved artists are: Roman Baranyk, Irina Bondarenko, Barbara Melnik Carson, Jarema Chypchar, Slava Gerulak, Lysa Gudz, Sviatoslav Hnatiw, Luboslav Hutsaliuk, Edward Kozak (EKO), Peter Marfey, Michailo Moroz, Mikhail V. Nadezhdin, John Nagridge, and Marta Sobko.
The pieces are for sale.
The Ukrainian American Archives & Museum, as it is officially fully known, has been around since the late 1950s.
Originally, it occupied a bank building on Woodward in Detroit. The entire building was soon moved to the corner of Charest and Commor, near the Immaculate Conception Church.
It was later purchased by a Roman Dacko and his wife, Ivanka, who began to fill it with art – paintings, photographs, ceramics and more – while also assembling a collection of historical information.
By 1978, there was also a separate Ukrainian museum established in the Ukrainian Cultural Center, run by two volunteers, Irene Zacharkiw and her husband, Ostap.
Later, this museum was merged back in with the longer-standing one in Hamtramck.
Among the more important exhibits they’ve curated or overseen in recent times were: a 2002 set-up that featured rare antique Ukrainian ritual cloths tended by Danylo Dnytrykiw, and three different exhibits in 2004, titled “Hutsul Exhibit,” “Orange Revolution Exhibit,” and “Ukrainian Headdresses and Embroideries.”
In 2013 they coordinated with the Detroit Historical Museum to use their space to feature an exhibit titled, “A Cultural Thread: The Enduring Ukrainian Spirit” at the DHM space.
In addition to the periodic art installations, the institution serves as a repository for Ukraine-themed archival materials, including a library of some 20,000 books, as well as rare Ukrainian immigration records.
The museum is located at 9360 Jos. Campau, on the east side of the avenue, between Edwin and Norwalk on the other side.