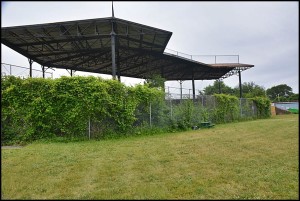 The historic Hamtramck baseball stadium might get a major-league overhaul this year. Keep your fingers crossed.

By Charles Sercombe
Once again, we dusted off our crystal ball and peered into what the future holds for Hamtramck.
Well, hello 2019, you look awfully familiar to last year.
In other words, the city has several leftover issues festering (rotting?) in the metaphorical refrigerator.
Nothing new about that.
In no particular order, let’s take a look at what’s ahead.
The partnership between city officials and the public school board proved a success. That mutual cooperation led to the award of an $800,000 grant from the Ralph C. Wilson, Jr. Foundation which will be used to replace the artificial turf at Keyworth Stadium and fund a master plan study on what improvements are needed in Veterans Memorial Park.
The hope is this partnership could lead to a massive grant from the foundation to renovate the historic baseball stadium located in Veterans Park.
We are talking about possibly receiving an $18 million grant to repair the stadium and create a recreational area that could become a major cultural attraction.
The stadium was once home to the Negro National Baseball League back in the day when African-Americans were not permitted to play in the white-only Major League.
It is only one of a handful of stadiums still standing that was used in that era.
Street repairs have been a huge newsmaker in the past few years, and that story continues.
The second half of the Holbrook repaving project will begin as soon as warm weather returns (which by our estimate is in another three months or so).
Last year Holbrook was repaved from Jos. Campau to Gallagher. This year it continues from Gallagher to Conant.
Also, Jos. Campau will get a new look when bike lanes are added.
There is no word yet whether the city’s alley repaving project will continue this year. Although the city’s budget has a surplus of about $5 million, there are some serious financial challenges heading our way.
And there could be a major setback — moneywise.
GM has announced it is closing the Detroit-Hamtramck Assembly Plant, also commonly known as the Poletown Plant, this coming June. Actually, GM says it will halt production at the plant as well as four other North American plants.
Insiders have told us that the plant will be closed permanently, and if that happens, there is a question whether the city will continue to receive $800,000 a year from the plant via a special agreement with Detroit.
It’s a complicated deal, but word is if production shuts down, so goes that revenue stream.
If GM is able to wiggle out of that payment, and you can bet the company is looking into it, the city will suffer a major financial hit. The city operates on a drum tight $16 million budget per year with little room to make cuts.
City officials are already facing a daunting task of figuring out how to fund the fire department once a federal grant runs out this coming January.
On the political front, City Councilmembers Saad Almasmari, Anam Miah and Abu Musa are in the last year of their terms. Will they seek re-election?
Are they even still electable?
A huge factor that has emerged in the last year is that the Yemeni-American community has become a powerful and united political force.
Also, a number of young adults have become politically active. This year look for a major shift in the city’s political landscape.
Retail-wise, look for more young entrepreneurs to fill out the empty storefronts on Jos. Campau – a trend that has been steadily playing out in recent years.
Well, the crystal ball is beginning to fog up. That’s it for now, but remember, in Hamtramck nothing is predictable!